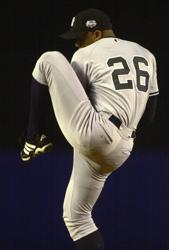 (POMONA, NY) – On Friday, June 24, as the Cuban National Team visits Rockland for a historic three game series, the Boulders will also welcome former Cuban National star, and New York Yankees pitcher, Orlando “El Duque” Hernandez to Palisades Credit Union Park. A fan-favorite, “El Duque” will throw out the first pitch prior to a 7:00pm start for the game.

Large crowds are expected ALL weekend and fans are encouraged to arrive as early as possible to ensure they don't miss any of the action!

A nine-year Major League veteran, Hernandez debuted for the Yankees in 1998 and was a part of three straight World Series Championship teams. The righty finished fourth in the Rookie of the Year voting and was named Most Valuable Player of the 1999 American League Championship Series. He also went on to pitch for the Chicago White Sox, Arizona Diamondbacks, and New York Mets, winning a fourth title in 2005 with the White Sox.

“I am very excited to be a part of this historic weekend of baseball,” said Hernandez. “An opportunity to showcase the talent of Cuban baseball players to the fans in the Lower Hudson Valley and Northern New Jersey, as well as a chance to return to a region where I was fortunate enough to win three World Series titles is something I’m looking forward to very much.”

Fans can still purchase tickets to the game by calling (845) 364-0009, sliding to www.RocklandBoulders.com, or by visiting the Palisades Credit Union Park box office. The first 2,500 fans will receive a commemorative bracelet to remember this historic series, while the first 500 kids 13 and under will receive Boulders Fire Helmets as part of Fireman Appreciation Night! After the game, stick around for a Fireworks Extravaganza, presented by Hudson Valley Harley Davidson, followed by a musical performance from Grupo Warachando!