Bats Power Rockland to First Win of the Season 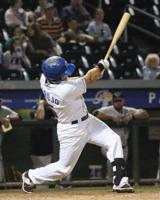 (AUGUSTA, NJ) – The Rockland Boulders pounded out 12 hits and scored nine total runs in the first four innings, en route to an 11-5 win over the Sussex County Miners on Friday night at Skylands Stadium. The win was the first of the year for the Boulders (1-1), while dropping the Miners (1-1) down to .500 on the young season.

The scoring began early for Rockland as Junior Arrojo launched his first home run of the season, a two-run blast to left off starter Michael Suk. Three batters later, Jared Schlehuber drove in Mike Schwartz with an RBI groundout, making it 3-0 Boulders. Two innings later, the Boulders would put up another crooked number with a familiar face.

With two runners on and one out, Marcus Nidiffer laced a ball to center that got by Jay Austin, resulting in a two-run triple. A throwing error from shortstop Michael Antonio allowed Nidiffer to score on the play before a Riley Palmer RBI single made it 7-0 Rockland. That inning would chase Suk as he gave up seven runs in only three innings of work.

Despite retiring the first six batters he faced, Boulders starter, Bo Budkevics, ran into a small hiccup in the bottom of the third. After loading the bases with one out, Austin would single home a run to end the shutout bid for Rockland. A Nick Giarraputo sacrifice fly and a Joe Dunigan single helped the Miners plate three runs and cut the deficit to 7-3.

The Boulders would get a pair of runs back in the top of the fourth thanks to consecutive RBI hits from Arrojo and Schwartz, making it a 9-3 lead. Miners reliever Josh Wood would then settle into a groove as he and Stone Speer kept the Rockland bats quiet for the next three innings. The defense would falter however in the ninth, allowing a pair of runs to score on two separate errors, making it an 11-5 game.

Even with the deficit, Sussex County would not go quietly in their home opener. Dunigan once again provided the offense with a two-run homer to right field, pulling his team with four runs. However, a strikeout of Sean Hurley to end the fifth began a stretch of nine straight batters set down by Rockland pitching.

Budkevics (1-0) picked up his first win of the year going five innings allowing five runs, three earned, on six hits and struck out four. Both Richard Cruz-Sanchez and Edgar Valle had impressive Rockland debuts on the mound, combining to throw four shutout innings to secure the victory. Suk (0-1) was saddled with the loss while Wood allowed two runs in four innings of relief for Sussex County while Tanner Keist also gave up two unearned runs in the ninth.

Both teams will be back at it on Saturday, May 21 at Palisades Cerdit Union Park in Pomona, NY with a doubleheader where the first 1,000 kids in attendance will receive replica Boulders helmets. Game One is set to begin at 6:30pm with a Fireworks Extravaganza taking place between contests, and the second game beginning about 30 minutes after the conclusion of the first. Tickets are still available at the box office, by calling (845) 364-0009 or by sliding to www.RocklandBoulders.com.