Rockland Holds on for 6-5 Win Over Ottawa 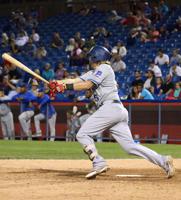 (OTTAWA, Ontario) – Marcus Nidiffer drove in four runs, including two home runs, and the Rockland Boulders scored three times in the top of the eight for a 6-5 win over Ottawa in Game One of the Can-Am League Championship Series. With the victory, the Boulders take a 1-0 lead in the best-of-five series with the Champions.

Nidiffer got the Boulders on the board first in top of the first with a two-run home run, giving Rockland a 2-0 lead. Champions starting pitcher, Austin Chrismon, would settle down and keep the Boulders off the board for the next four innings. Meanwhile, Ottawa responded with a pair of runs in third on a double from Adron Chambers and a single from Kenny Bryant to tie the game.

In the bottom of the fifth, Sebastien Boucher would give the home team its first lead, singling off Brett Palanski to bring in Chambers. Palanski would end up leaving the game with one out in the inning due to injury but Daniel Carela would escape the frame without further harm. The game was quickly knotted up again in the top of the sixth as Nidiffer blasted a solo shot, his second of the game. However, Ottawa regained the lead in the seventh with back-to-back RBI hits from Boucher and Bryant, taking a 5-3 lead into the eighth. 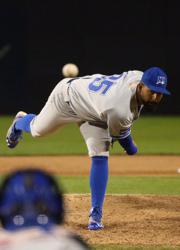 Hector Nelo Gets First Save of Postseason (Courtesy: Drew Wohl)

After Chrismon exited the game with an injury for Ottawa to start the inning, Randy Hamrick allowed three straight hits, including an RBI single from Nidiffer, making it a 5-4 Champions lead. Closer Tyler Wilson then came on to try and get a five-out save but struggled to hold off the Boulders. Consecutive singles from Jared Schlehuber and Devin Harris would give Rockland a 6-5 lead.

Hector Nelo would toss a perfect eighth inning, but loaded the bases in the bottom of the ninth with two outs before getting Alexander Malleta to ground out to end the game for his first save of the postseason. Matt Kostalos (1-0) got the win pitching two-thirds of an inning while the loss went to Randy Hamrick (1-1) who allowed three runs while recording just one out in the eighth.

The best-of-five series resumes on Wednesday night at RCGT Park for a 7:00pm first pitch. After that contest, the series will shift to Palisades Credit Union Park on Thursday, September 15th for Game 3 with Game 4 (if necessary) being played on Friday, September 16th and Game 5 (if necessary) taking place on Saturday, September 17th. Great seats are available for all three potential home games in the Championship Series by calling (845) 364-0009, visiting the box offive, or sliding to www.RocklandBoulders.com.