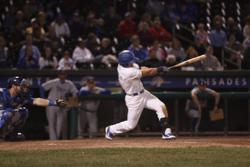 Short Stop Junior Arrojo hit a grand slam to give the Boulders a 4-2 lead in the fifth inning. (Courtesy: Kelly Curtiss).

POMONA, NY- In another wild game that has personified the Boulders postseason run, Rockland failed to comeback one final time, dropping a heartbreaking Game 3 to Ottawa, 13-12 in twelve innings at Palisades Credit Union Park.

Jason Byers’ night didn’t start perfectly, but the Rockland starter soon found his groove. After allowing a two-run home run in the first to Albert Cartwright, he settled down to retire the next nine batters he faced.

In the fifth, the Boulders made their attack. After loading the bases with one out, Junior Arrojo cranked a grand slam to give Rockland a four two lead. With two outs in the same inning, the bases were loaded yet again, and this time Mike Montville played the hero smoking a triple to put the Boulders up 7-2. All seven runs were tagged to Ottawa starter Yean Carlos Gil.

It seemed like a comfortable lead, but it wouldn’t be enough. Ottawa came back and hit two more homers off of Byers, knocking him out of the game and making the score 7-5. Mike Adams came in and gave up another two runs in the eighth to tie up the game. Butler continued in the eighth, but allowed the go-ahead run to come in on an sac-fly. Albert Cartwright finished the game with two home runs, doing the most damage against the Boulders.

The Boulders would be silent until the eighth, when they tied the game back up on a Mike Fransoso sacrifice fly, guaranteeing fans another epic finish in what has been an unbelievable playoffs. Nothing would come across for either team in the ninth, sending the game to extra innings, the second straight extra inning game in the series.
In the eleventh, Ottawa finally broke through, first scoring a run off an RBI single by Albert Cartwright with the bases loaded off of Matt Kostalos. Hector Nelo (2-2) would then sub in, and allowed three more runs to score before he worked his way out of the inning. The game then seemed out of reach, but the Boulders would not quit. 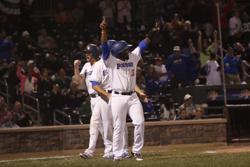 Center Fielder Leandro Castro tripled in two runs in the bottom of the 11th, setting up Mike Montville's game-tying RBI, but Ottawa responded with a home-run in the top of the 12th, claiming a Game 3 win. (Courtesy: Kelly Curtiss)

In the bottom half, the Boulders kept putting on baserunners, putting the pressure on Ottawa reliever Randy Hamrick (1-1). Leandro Castro tripled home two runs, and Mike Montville struck the tying blow, with a single that would drive in Castro.

Nelo would allow a homerun before striking out the last two batters he faced to work through the twelfth. The Boulders again would threaten, loading up the bases with only one out. However, Devin Harris and Leandro Castro both couldn’t break through, handing the Boulders their first loss of the series. They still lead the best of five game series two games to one.

The Boulders will continue their attempt to #ReclaimTheCup tomorrow night, on Friday against Ottawa, with the game scheduled to start at 7 P.M. Great seats are still available to watch as the Boulders look to clinch their second pennant in three seasons. Great seats are still available by visiting the Box Office, calling 845-364-0009 or sliding to RocklandBoulders.com.