Cardullo to the Major Leagues, while the Boulders returned to the Championship

(POMONA, NY) – A season of ups and downs saw the Rockland Boulders reach the precipice of another Can-Am League title. Despite coming up just short of the ultimate goal, the 2016 campaign was a year full of memories while also laying the foundation for a title run in 2017.

Although the team fell short of bringing another title to Rockland, the Boulders did lead the league in total regular season attendance for the fifth straight year as over 160,000 fans came through the gates at Palisades Credit Union Park this year for both the regular season and playoffs. One of the bigger highlights for the team may have come hundreds of miles away as the franchise watched a fan-favorite become its first Major Leaguer. 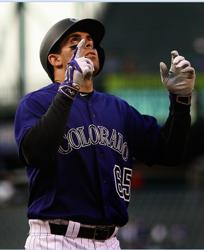 Former utility player Stephen Cardullo (2013-15), signed with the Colorado Rockies in the offseason and was assigned to Triple-A Albuquerque after Spring Training. A highly productive season with the Isotopes earned him a call up to “The Show” on August 26th, making him the first player ever to go from the Boulders to the Majors.

The loveable infielder/outfielder recorded his first big league hit on August 29th before walloping his first career home run, a grand slam, on August 31st, his 29th birthday. Rockland finished the season paying homage to Cardullo, renaming the left field grandstand “Cardullo’s Corner” in honor of his 2015 playing position with the team, and as an ode to where his grand slam in Game 5 of the 2014 Can-Am Championship landed. Heading into the 2017 season there are even more plans in the works to further honor this dream come true for one of Rockland’s greatest, and most beloved talents.

“The only words I really have are ‘hard work pays off’,” said Boulders Manager Jamie Keefe of his call-up in August. ”This is a guy who has put in the daily grind and nobody has believed in his ability more than Stephen Cardullo. Now he’s going to get a chance to prove that to everyone else on the national stage. We as an organization are so happy, ecstatic, and proud that just 347 days ago he was wearing our uniform. We look forward to watching his Major League career take off.” 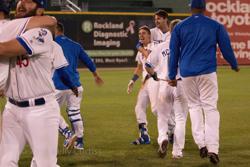 Rockland reached the postseason for the third straight year, winning 11 straight games in August to help them to the #2 seed with a 58-42 overall mark. What made the final month of the season more impressive was that the Boulders entered August in the midst of an 11-game losing streak, battling for the #4 seed. However, impressive play down the stretch led them into the first round where they battled the Quebec Capitales in an epic five-game series.

After dropping the first two contests north of the border, rookie Mike Montville extended the season with a walk-off solo home run in Game 3 while “Big Game” Bo Budkevics tossed eight strong innings in Game 4 to force a decisive contest. Trailing 2-1 in the bottom of the ninth, Rockland loaded the bases with only one out. Mike Fransoso would then lace a single into right-centerfield, driving in two runs and giving the Boulders an improbable 3-2 comeback win in the game and the series.

The Boulders would advance to the Championship Series for the second time in three seasons where they took on the Ottawa Champions, who had just defeated top-seeded New Jersey in four games. Rockland earned two hard fought wins in Canada and came home with a 2-0 lead in the best-of-five series. However, the Champions found ways to rally and defeated the Boulders in Game Five to win their first Can-Am League title. 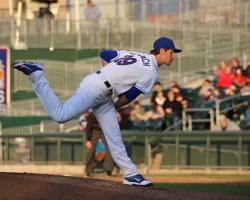 Markus Solbach was one of two Boulders to be signed by Major League organizations in 2016. Both he and Alex Gouin were signed by the Arizona Diamondbacks.

The 2016 season began by honoring the work of over 25 employees who have been with the organization since its inception in 2011 with a pre-game ceremony on Opening Day. Pitcher Markus Solbach became just the third different hurler to start the Boulders home opener and pitched valiantly despite a 2-1 loss to the Sussex County Miners.

However, the German hurler would dominate the league from there, posting a 6-2 record with a 2.43 ERA before being signed by the Arizona Diamondbacks. The righty was assigned to High-A Visalia and helped lead the Rawhide to a Northern League Championship and a berth in the California League Championship berth.

Solbach wasn’t the only Boulder to find his way into affiliated baseball this summer. Alex Gouin, who was in the midst of his second year with the team, also had his contract purchased by the Diamondbacks, getting assigned to Low-A Hillsboro before finishing the year with Rookie affiliate Missoula. The righty was 3-1 with a 3.16 ERA in seven starts for Rockland. 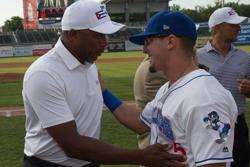 What may have been even more memorable for Gouin, as well as the other members of the Boulders and their fans, was a visit from the Cuban National Team June 24-26. The world-renowned squad was part of the Can-Am League’s International Showcase, which also featured a return visit from the Shikoku Island League All-Stars. Gouin, the Cuban-born righty, started the opening game of that series against his home country after former Cuban great Orlando “El Duque” Hernandez threw out the ceremonial first pitch to former New York Yankees teammate, and Boulders minority partner, John Flaherty.

The historic weekend also included an appearance from beloved hurler “El Tiante” Luis Tiant and a world record feat courtesy of Nik Wallenda. The famed aerialist traversed across Palisades Credit Union Park, his first-ever walk across a ballpark, and “dropped” the ceremonial first pitch from over 250 feet above the ground, setting a new Guinness World Record. 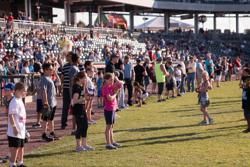 Wallenda’s achievement was the second world record completed prior to a Boulders game this season. On June 21, a total of 182 Rockland County students broke the mark for most simultaneous first pitches thrown. It was part of the “Read for the Rockland Boulders Record” program that saw 2,586 students from 23 schools in Rockland, Westchester, Orange, and Bergen (NJ) Counties participate in the reading initiative.

“It’s tough enough to establish one Guinness World Record let alone two like we experienced at Palisades Credit Union Park in 2016”, said Ken Lehner, President.  “In one instance one man, Nik Wallenda, displayed his courage in the other instance a bevy of students, teachers and parents showed their commitment to education and reading in particular.  In both cases, the Rockland Boulders were honored to play a small part.”

Once again this season, the Boulders reached high marks in their community efforts. Along with their reading initiative, a deeper partnership with Active International was established to help local children better understand the dangers of alcohol and substance abuse. This included videos and public service announcements with members of the Rockland Boulders.

The two organizations also partnered to raise even more funds for area charities by unveiling the 2016 Active Auction that gave fans a chance to bid and win Boulders memorabilia and once-in-a-lifetime experiences. This new platform was in addition to a revamped Charity Challenge that turned the money-raising initiatives from a singular day to a true season long fundraising effort. In total, more than $80,000 was raised and/or donated to area charities via fundraisers held at the ballpark in conjunction with Boulders Benefits, the charitable wing of the Rockland Boulders. 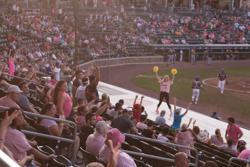 Rockland also furthered it’s commitment in the fight against bullying in schools by partnering with “Don’t Be A Monster” a national organization run by Haunted Houses across the country to help stop and prevent bullying amongst school children. More than 10,000 students at three separate games took part in a pre-game presentation by “Don’t Be A Monster” this season.

Fans also found new ways to enjoy the ballpark while enjoying some of the same traditions that have become staples of Rockland Boulders baseball. The addition of two new food vendors, Teri Teri and Austin’s Restaurant, along with an expanded food menu added to the selection of choices for fans at home games.

The annual Cooperstown Classic made its return as hundreds of fans made the trip to the “Birthplace of Baseball” and watched their squad defeat the Sussex County Miners at Doubleday Field. Other yearly traditions that returned were the ever-popular Irish Heritage Night, Boulders Beach Bash, Star Wars Night and Pink in the Park, the two latter nights helping to raise over $11,000 combined to help The Center for Breast Health at Good Samaritan Regional Hospital and Maria Fareri Children’s Hospital. 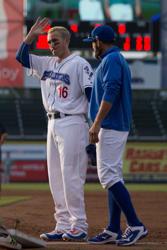 On the field, excellence continued to be shown by the Boulders with memorable moments and historic accomplishments taking place. Maybe the most noteworthy occurred on June 3rd with a leadoff walk by Jared McDonald in the first inning. That base-on-balls was the 75th consecutive regular season game in which he reached base safely, setting a new Minor League record. McDonald would fall short of the all-time mark, held by Ted Williams, but was able to hold on to the record as teammate Junior Arrojo also came close by reaching base in 72 straight regular season games.

Arrojo was one of two Boulders to earn All-Star nods in 2016, joining catcher Marcus Nidiffer at the American Association All-Star Game in St. Paul, Minnesota. The two represented the Can-Am League, along with manager Jamie Keefe, as part of the South Team in the showcase. Both Arrojo and Nidiffer were also voted as Can-Am League All-Stars, the second straight year in which they each earned the honor. Arrojo set a new league record with a .483 on-base percentage while also leading the league with 47 stolen bases. Meanwhile, Nidiffer led Rockland in home runs (20) and RBI (79) for the second straight season. 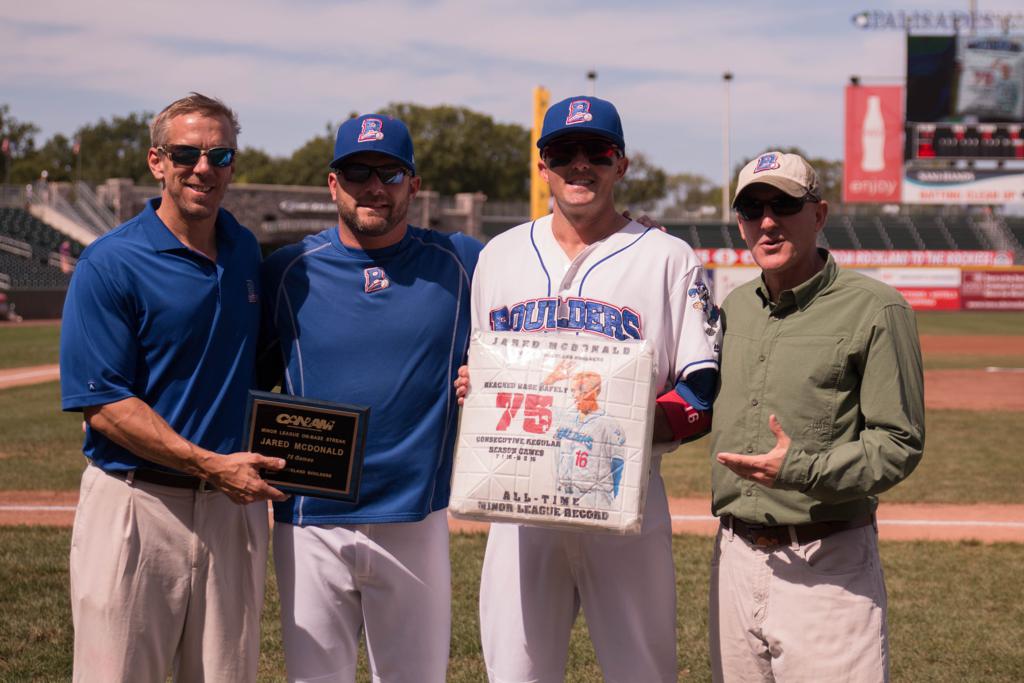 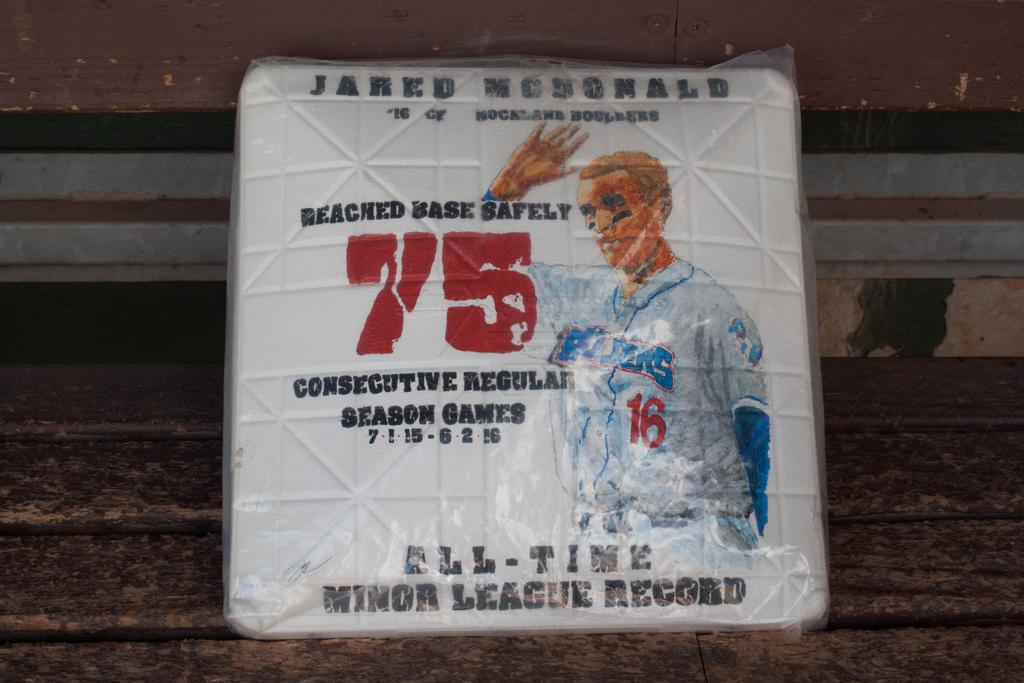 The Boulders also gained national attention for their toughness on the field as their rivalry with the New Jersey Jackals reached new heights. On Thursday, July 14th, tempers flared with Rockland trailing 8-3 in the bottom of the ninth and the bases loaded. New Jersey's Fernando Cruz plunked Marcus Nidiffer and the benches emptied.

While no punches were thrown, it set the table for an incredible comeback and an even more unbelievable reaction from the Jackals pitcher. After seeing Rockland tie the game and force extra innings, Cruz charged across the diamond at the Boulders dugout before the start of the 10th inning.

However, Cruz would not reach his intended target as Pat Butler took him down, igniting another benches clearing brawl between the two. After multiple players were ejected from both teams, Rockland went on to win 9-8 in 10 innings.

The video of the incident has been viewed more than 1.8 million times and was featured on national outlets such as Deadspin, Sports Illustrated, and will be centerpiece of an upcoming episode of NBC's "Caught on Camera with Nick Cannon". 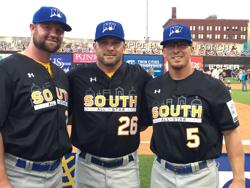 A number of other Boulders received league honors as both Devin Harris (July) and Jared Schlehuber (August) were named Rawlings Players of the Month in 2016. Pitchers David Fischer (July 24) and Richard Salazar (August 28) also earned Pointstreak Pitchers of the Week awards with Salazar setting a league record with 29.2 consecutive scoreless innings.

Overall, the 2016 season was another one for the history books as thousands of fans made countless memories watching their Rockland Boulders. With the impressive grit shown by the team on the field, and the exciting atmosphere created by the staff and fans, a chance to “Experience the FunShine” during the 2017 season is well worth waiting for. 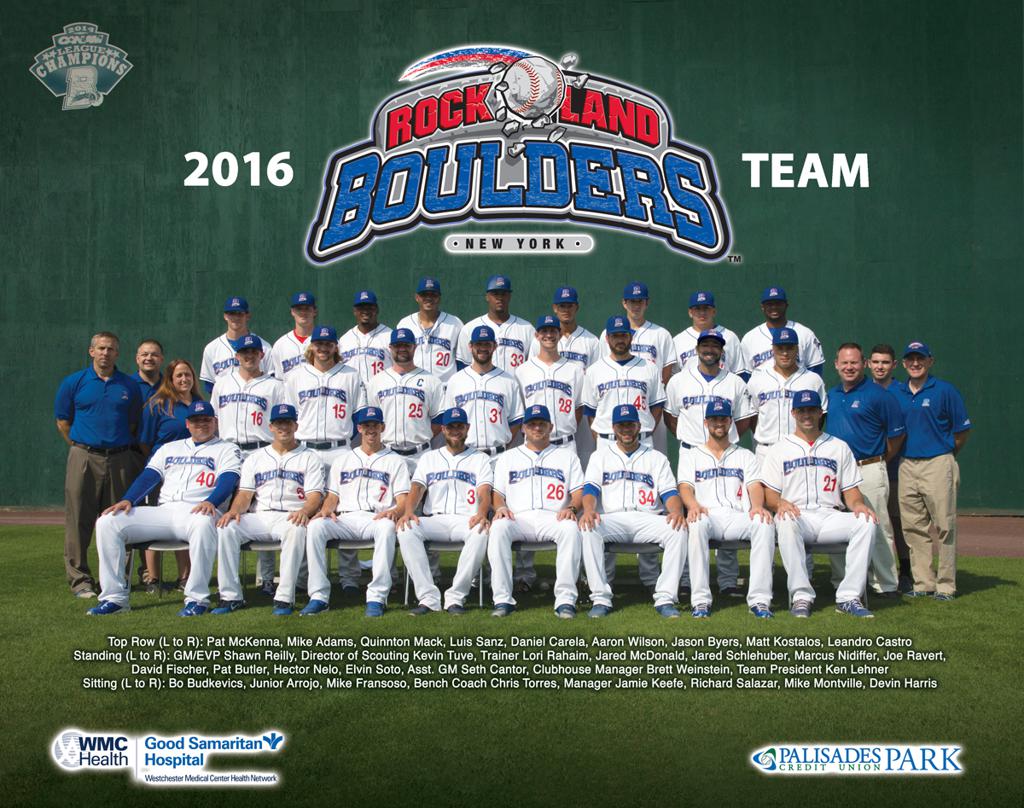